An analysis of the European car rental market concentration shows that it is an unconcentrated market on a continental level. These findings complement a previous article, where we considered the relatively fragmented European car rental sector, particularly measured against its US counterpart, which we see as likely to consolidate going forward. The foundation of our hypothesis of an upcoming consolidation is the approximately 65% share held by the top 5 operators in Europe vs the approximately 95% share held by the top 3 in the US. We do not see Europe becoming like the US in terms of market concentration, in general European competition authorities tend to be stricter than its American counterparts, but we clearly see room for the 5 current « majors » to become 4 (and potentially even 3), with bolt-on acquisitions of independent operators driving further consolidation and market concentration.

A key indicator of the likelihood of consolidation in a market is how competitive it is. Our analysis, using the Herfindahl index, a much used metric by competition authorities, to measure market concentration, indicates that the European car rental market is unconcentrated on a continental level. There are, however, significant differences in concentration across the region, with some countries falling into the category moderately concentrated markets. The source of the data upon which we have made our analysis is Europcar’s listing prospectus issued for its IPO in June 2015.

What is the current car rental market concentration in Europe? The chart below shows market share data for Europe and the top 5 countries. As one easily sees, the picture is very different across the continent, both in terms of where each operator has its strength, share of the majors and the presence of independent operators. 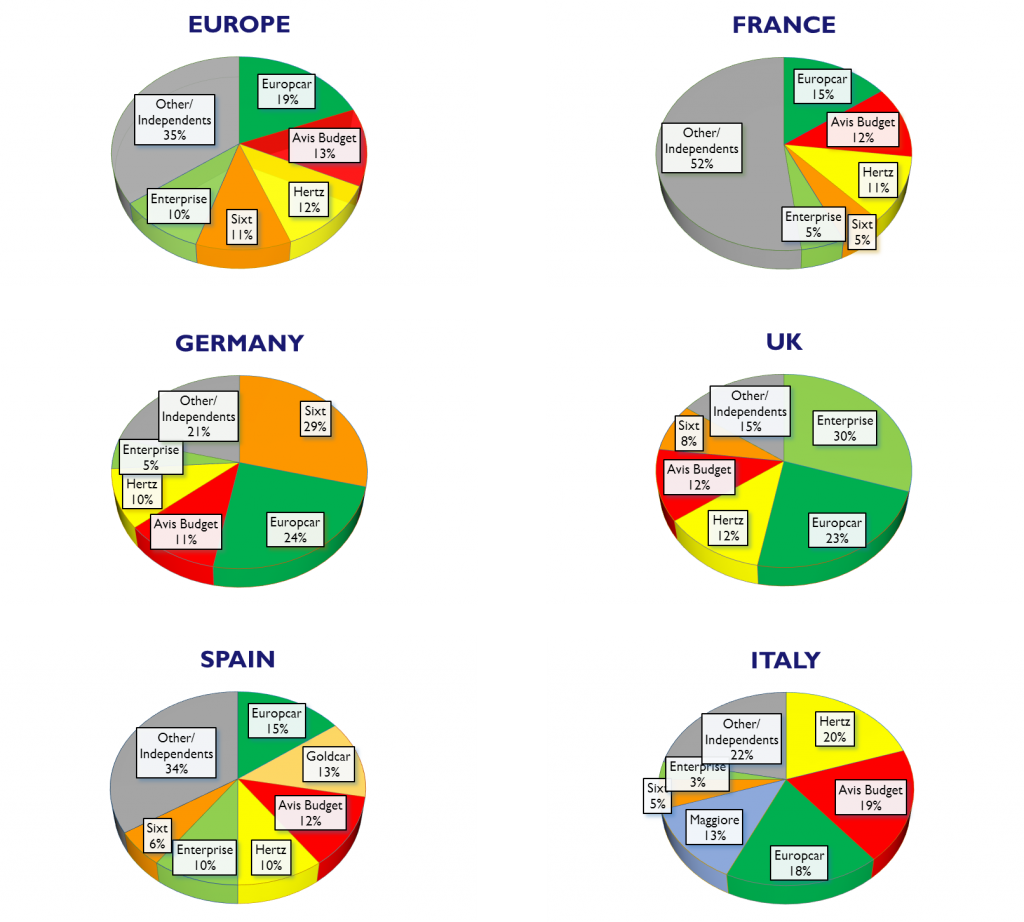 If one takes this one step further, considering concentration ratios as a complement to market share data, one gets an even better feel for how concentrated the car rental market is across Europe.

A key question when considering the concentration and competitiveness of a market is obviously how to define the market scope. In our opinion the most relevant market to be considered is the European market as a whole, not the individual countries. We believe this is so due to the international nature of the business, i.e. foreign travelers both for business and leisure purposes represent a large part of the client base, recent changes in the European jurisdiction ensuring that in principle there is no price discrimination based on domicile, i.e. singular pricing for all European citizens, and the growth on online intermediaries, e.g. OTAs, car rental brokers etc, drive increased price transparency. Further, there are numerous alternatives to car transportation and car rentals, such as trains and other forms of public transportation, taxis, ride sharing etc, which to us means that one should not look at the car rental sector in a silo, but rather take a broader view of mobility service providers.

What would be the impact of consolidation on the Herfindahl concentration ratios, likely to influence the potential for approval by antitrust authorities? We have made a simulation of the impact on the H4 concentration on the assumption that #2 and #3 merges, both for Europe and each country. This is a purely theoretical exercise and should not be considered neither an advice by us to various operators on deals to pursue nor an opinion on likely and/ or realistic scenarios. The findings are summarized in the table below.

As one can see, for Europe as a whole, this would move the car rental industry into the category moderately concentrated market and with a delta greater than 250 we see a review as likely. However, a review does not mean a refusal, and we are of the opinion that this scenario would be acceptable from a market concentration perspective. We do not exclude that certain concession will have to made in certain markets, e.g. Italy, the UK and Germany due to relatively higher concentration in these, but with a couple of exceptions we do not see this as deal breakers.

Comparing Europe with the US

How does this compare to the situation in the US? As one can expect given the market share of the top 3 American operators, the concentration ratio in the US is significantly higher than what we see in Europe. Looking back over the last decade, concentration on a H3 level has grown steadily to a level that is way beyond anything that is realistic in Europe. 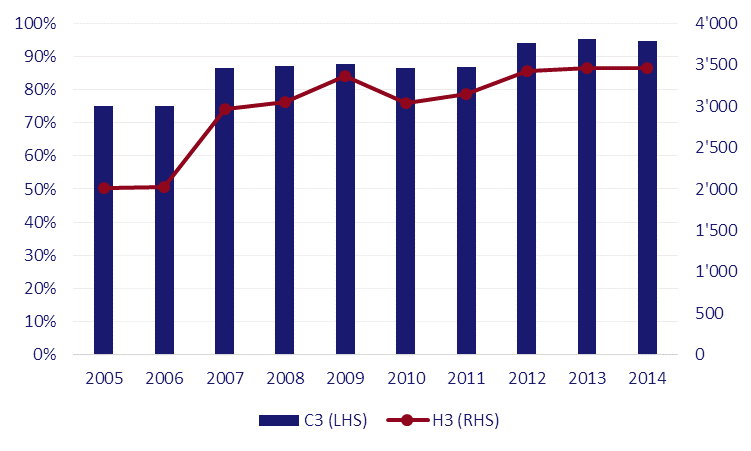 Comparing H4 concentration in Europe and the US

As one can see, the US market is very concentrated and significantly more so than in Europe. Was there to be a merger in the European sector, e.g. between #2 and #3, it would still remain only moderately concentated (note: this is a purely theoretical example used for illustrative purposes as this would involve a merger between Avis Budget and Hertz, which we rate as a very low probability scenario). Getting to the level of concentration seen in the US simply does not seem realistic in a European context.

To summarize, our analysis show that the European car rental market concentration is limited, which indicates that there is room for consolidation in the sector. We have seen signs of this process starting recently, mainly through acquisitions by Avis Budget and Enterprise, but we expect the movement to accelerate going forward, involving both the 5 majors and independent operators.

This article is a summary of a white paper on the European car rental market. The full paper is available for download here.